Now, what is it in this book that appealed to so many? If you have not read it, why should you read it? What should you expect from it? Why is that person hushing me when I mention the name Zeus in public? Why do girls and boys like Nico so much? Why did Luke deserve better (no really, he deserves better)? All these, I won’t answer, unfortunately, but there are more than enough reasons to start reading the series.  END_OF_DOCUMENT_TOKEN_TO_BE_REPLACED

This is not a review about the Dark Tower.

I have so many things I want to say about this book but whenever I get down typing it, I come up with nothing. Reading it was… well, a unique experience, like punching yourself and wondering how that happened.

The Dark Tower is King’s Magnus Opus. An equivalent of 4,250 pages, it certainly belongs under the Magnus Opus category and reading it was my biggest addition to my reading list last 2015.

END_OF_DOCUMENT_TOKEN_TO_BE_REPLACED

The next three novels of the series is where things gets bumpier just when you thought things were getting better.

A sixteen year old Roland pisses a lot of people.

Stephen King put his fans at the edge of their teeth with The Wastelands’s cliffhanger, only to write its sequel after six years. Fortunately, I did not have to wait for too long before I got my hands on Wizard and Glass, which later on became my favourite novel in the series as well. I think this is where King has completely become comfortable with his series. If The Gunslinger and the Drawing of the Three were outlines and The Wastelands were the details and colors, Wizard and Glass are the final touches, completing not just Roland’s character but a picture of Roland’s old world too. END_OF_DOCUMENT_TOKEN_TO_BE_REPLACED

It took a night for the idea to sink in. I lied on my bed, thinking how much time I spent reading that mammoth of a book and finally, finally getting it done with. It felt like the leash around my neck was gone and I could go back getting a life. Thank ya big-big. I enjoyed it as much as I thought of it as a burden.

And because I am so done with it, here’s a review of the first three books (that I should have reviewed long ago but it was only later, after reading the last novel, when I could write something about them). There may be light spoilers. Hear me sai, hear me very well.  END_OF_DOCUMENT_TOKEN_TO_BE_REPLACED

I was one of those people who did not read Stephen King’s books simply because he’s popular. Stephen King attracted the ‘other’ crowd and I was not one of them, until I decided to. Earlier this year, I wanted to read a horror novel and Stephen King, as the blurb on the covers of his book say, is THE ‘King of Horror,’ he was the first of my choices.

Here are his novels I’ve read so far, not including the Dark Tower series. END_OF_DOCUMENT_TOKEN_TO_BE_REPLACED

Neil Gaiman writes dark, horrid fairytales that suit my dark, horrid interests and because of our similar tastes of dark and horrid elements, it’s no mystery how I came to adore Gaiman and his novels, thus, beginning my little mission to read nothing but his books this past months, resulting to dark and horrid feelings that I hope does not affect my dark-less and horrid-less life.

What I like about Neil Gaiman is the versatility of his stories, ranging from one adventure to another, the variations of themes while still adding his own eccentric flavor. His stories are simple (except American Gods apparently) yet exciting, more on adventure and plot than character that keeps the pages turning without the readers analyzing the character’s psychological health or other complicated twists. Though Gaiman’s novels are dark, they’re not at all complex.

Here are his books I’ve read so far:

Neverwhere was the book that got me hooked up with Neil Gaiman and I wish he wrote more of these. It’s my favorite work of his so far, simply because I had a lot of fun reading it. It reminded me a lot of The Wizard of Oz except that Neverwhere appeared much darker in my imagination unlike Dorothy’s high heels and golden-bricked road. Like the Wizard of Oz, Neverwhere introduces a world and adventure dark yet enticing, and a diverse set of characters that are never boring. The dialogues are fun and the plot is rather light and fast-paced, easy to finish, easy to enjoy. Though targeted for adults, Neverwhere is an easy, fun read for anyone and I think even a younger audience would like it.

I highly recommend Neverwhere as a first Gaiman read because it’s truly the kind of novel you’d beg for more. It is funny, extremely addicting, and brings you to a dark but quirky London Below. Also, try listening to BBC’s radio play of it. It’s as amazing as the book.

The Graveyard Book gave me mixed feelings and questions not entirely philosophical like, “Is there something wrong with me or the book?” Have I lost my innocent awe? It was a weird guilty feeling because one thing about TGB is that I didn’t enjoyed it as I thought I would.

TGB consists of short stories of Bod’s adventures as he grows up. Each story gradually builds up a bigger story that sheds light on Bod’s past and connects all the characters together, thus, the climax of the seemingly loosed novel. A new lesson is learned in each story, making the novel what I can call Gaiman’s genuine children’s book ever and his only novel (that I’ve read so far) that exhibits clear moral lessons (some atleast), though it usually lingers to listen to what your elders tell you and those sort of thing, and the unusual coming-of-age of a boy who lived with dead people

Child protagonists usually allure me and they’re enough reason to love a book, no matter now whiny they could be. But Bod just didn’t click to my interest. He was too gray and nothing else but curious. Reading through his perspective was looking into a set of binoculars with not much of an awe of what’s inside it. Despite seeing Bod grow from a 6 year old to a teenager, there’s not much difference between his child self to his young man self. Bod remained, well, Bod. It was a fine novel but not quite memorable. 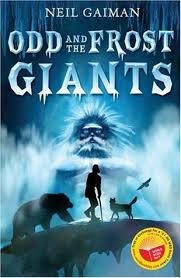 A short story about Odd and his mini adventure in returning the gods of Asgard to their homeland. A highly enjoying and quick read that amused me one afternoon. The illustration makes creative use of the space and perspectives. It was a witty and quiet read.

Coraline might be a inspiring lesson of courage and wits but I don’t think my kids would understand that, because I did not, and I see no point of inspiring my kids to join the darkness. Even so, I loved Coraline. I loved Coraline and her brightness, her silent nature, her adventurous streak, her courage, and her cynical views in the most simplest things. It was an odd novel for a children’s book but nevertheless fun and dark and I’d read them to my future kids anyway. Maybe they’ll understand it far better than I.

I just did not get it.

So I’ll leave it for now until I get it.

I’ve only read a few of its stories. It’s a recommendable pick if you want a dash of morbidity for a while.